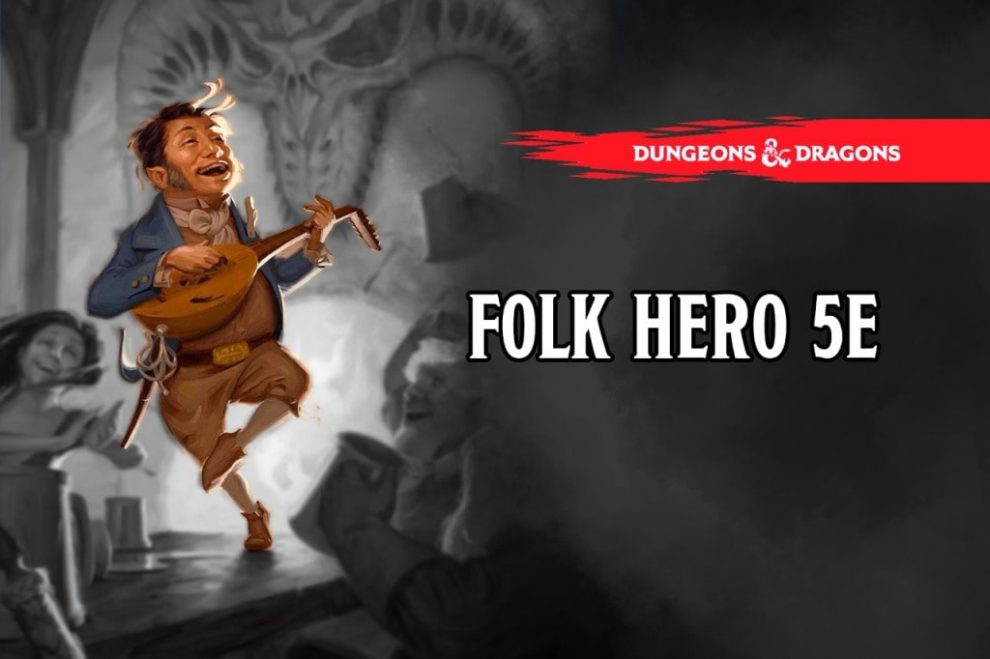 The article below gives you a brief about the Folk Hero 5E background with its suggested characteristics. Read the following article to know how to incorporate this background to your character.

Today’s discussion is about the Folk Hero 5E background, which depicts the characters of the bottom social class. They are destined to suffer from many hardships during their course of the journey in the game. The people in their hometown have seen a fighter in them, who fights against tyrants and monsters.

These characters are larger-than-life heroes who battle epic villains and start their adventuring career in Dungeons and Dragons. These folk heroes define themselves as the characters that perform selfless acts singlehandedly, without any magical powers for weaponry. They do not back out from facing the consequences even if it haunts them for the rest of their lives.

The Folk Hero background 5E characters generally opt for a simple profession amongst the peasantry like a farmer, servant, woodcutter,etc. Still, something happened that changed their lives forever and made them the hero of the people. This table discusses the defining events that marked your character for incredible things, and you need to choose one of them.

Also, if you like this character then I’m certain that you’d also fall in love with the D&D Courtier who rises to fame through their talent.

Your character represents the civilian class, where they are comfortable living with the villagers. If the villagers think that you’re in danger, they’ll find a place for you to hide. Also, they can cover you from the law but won’t sacrifice their lives for you in the 5E Folk Hero.

The social class of 5E folk heroes is a virtue rather than remorse and the villagers play a crucial role in their lives.

The below section will lead you towards the combinations of the various classes and our 5E Folk Hero background.

The barbarians can help the folk heroes as they also belong to the Origins far from civilization and their heroic acts add to their status. They’d embrace this d&d folk hero status as their stories will begin from the common origins to the new you. However, you need to choose a defining event that will determine whether they could perform the heroic acts selflessly or not.

Bards having the dnd folk hero background may raise many questions about their fame. Therefore, you could elaborate the storyline from the beginning to their fame as this class can control the news in a medieval setting. Bards weaponize their opinions, but a folk hero might be a perfect blend as it can cover the heinous acts performed by this class. Other bards are usually fighting for the betterment of the world and its people like a real freedom fighter.

The clerics are known to have a direct connection with God who connects the mortals with the divine. The cleric folk hero combination will add a moral background to your character and strengthen that divine connection. This background works better with clerics as they stand up for the people, which is indeed a selfless act. The clerics don’t forget their roots, and they might get a political opportunity to earn people’s respect.

A Druid can discover its origin story from the folk hero background itself as they have a natural connection with the world. For instance, they stood up to control a natural calamity like stopping a flood. The background makes your character a relatively ordinary person before the defining event changed their life. A druid dnd 5E folk hero might serve the world as a healer by spreading the old faith of increasing the growth of crops and livestock. It could benefit their community as the peasants are emotionally attached to their lands, in general.

A fighter folk hero usually would take the military part. Still, to defend their soldiers, they could also stand up against the ranking officer. This shows their courage that makes them the hero amongst the other men. The relationships could lay a better foundation for the back-story as you need a good storyline for your DM points that would benefit in the campaigns.

A monk folk Hero could also be a better option for your character like other martial artist. They would protect the world from trouble makers but in a priest style. Choose a suitable defining event that makes your martial path more exciting.

A paladin will nicely fit into the folk hero background as nothing is more appealing than a knight fighting monsters to protect the world. They could easily fit into this archetype with the high fantasy campaign that benefits your player to get more DM points. Paladins can build on their defining event where they realize the darkness and the chaos that threatens the world around them.

They are considered to be the ultimate saviours of civilization, and the relationships can become crucial in your character’s development.

Rangers are considered to be at the edge of the civilization and wild, and the folk hero background will perfectly blend with it. Your character’s bravery before the defining event is the reason why your player stands up against the trouble makers. A folk hero ranger will benefit your character with humble beginnings that will turn them from a hunter to a fighter.

The rogue folk heroes make an exciting combination as this class has defined skills than morals, and it’ll make your character unique. Your character might have a heart of gold before the defining event, and they join the path of crime. These characters obviously won’t turn for self-sacrificing acts but will sure fight the enemies of the world. Your player’s relationships with the other fellow peasants will lay a good foundation for their back-story.

A Sorcerer can blend in this background as they could serve the creator by standing against their abusive lords. Your character’s class and experience both will determine and leave hooks for the back-story of your player.

Warlocks are the natural folk heroes as their deeds of heroism can be the first act in the service to their patron. Warlocks are mostly defined by the relationship with their patron and folk heroes by their community. These characters made a pact with an archdevil to save their village from the terrible plague or a divine creature.

Warlocks are mostly secretive about their pacts, but their community celebrates it as a pride. In due course of their journey, they make two major choices, which accept the agreement or stand for the people.

A wizard folk hero becomes an extraordinary combination as they have a cloistered life engaging them with ancient tombs instead of people. But, a wizard must have an origin as they may have even defended a village at no personal cost. They can also provide magical services to the peasants so that they benefit from a mending spell, or enjoy a firework show. These characters need to have a better relationship with their community.

These were some of the Folk Hero 5E suggested characteristics, including their bonds and flaws. But if you wish to be on the other side of the coin and scrutinize folk heroes instead, then choose the Anthropologist background. Visit us for more related content.