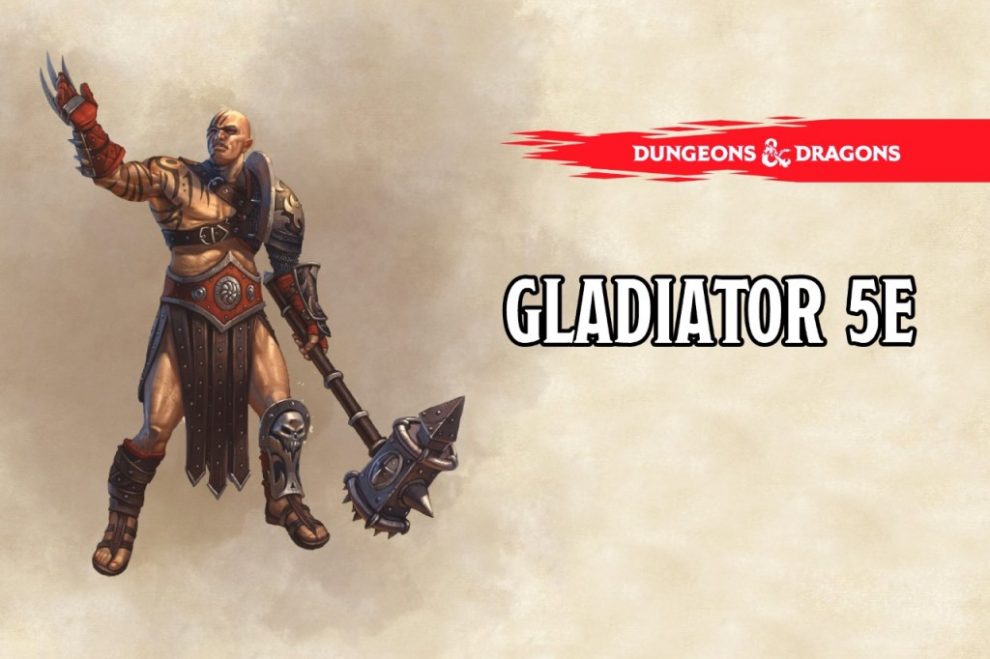 The characters in 5E Gladiator participate in the armed combat against other gladiators, wild animals, etc for the audience’s enjoyment. Sometimes the martial skill competitions like archery contests, chariot races, etc. through dangerous obstacles precedes the armed combat.

These combats are held in public arenas if sponsored by the government or in underground sports clubs to benefit the criminal organization. These characters become Gladiators willfully, after being forced into slavery or perhaps be criminals too who are punished for being in the arenas but succeeded in the end.

The dnd 5E Gladiator combats are deathly in some areas, but in other enlightened places, it’s nothing but mock battle, audience’s entertainment. Even if the fight is on a stage, the audience will be unaware of the actual nature of the sport as for them it’s choreographed, only sponsors and the fighters knows the truth.

For those whose idea of entertainment doesn’t involve bloodshed, we’ve got you covered. You can go for the Entertainer Personality Traits for a fun prospect.

These Gladiators can also be independent who has won freedom or be a participant travelling the world to prove themselves in public combat.

Every dnd 5E gladiator has its ways to fight in the battle. Some use fists, but others work with magic and weapons.

The Gladiator 5E might be behind your fame or infamy because of their skills, and hence they get a feature called, “Ring Name”. It protects your identity from the outside world as it gives you a nickname that might be either fictional or a descriptive title. These characters develop this ring name as their stage personalities by adding some quirks or gimmicks. It attracts the audience and makes their performance more memorable. You can work with your DM to know the details of this personality.If you’ve read the Urchin background, you’d see the resemblance of transformation in both BGs.

Your second identity is your character’s ring name. People might not recognize them when they travel in regular clothes but will treat them like celebrities, when their stage name calls them. Also, their fans will shower them with lots of gifts, food, and even a place to sleep. However, they might also be a challenge with opportunists who try to defeat them in combat.

The 5E gladiator background makes the characters more boastful and outspoken. They take pride in whatever they have achieved, but their personalities might differ on and off the stage.

The section below is all about d&d gladiator background and its personality traits, ideal, bond, and flaws.

These were some of the features and traits of the gladiator background 5E in the article above. Also, make sure you know ample about the 5E gladiator to choosing it as a background of your character. Make sure to read about other articles on Gameizmo.com to not miss out on anything