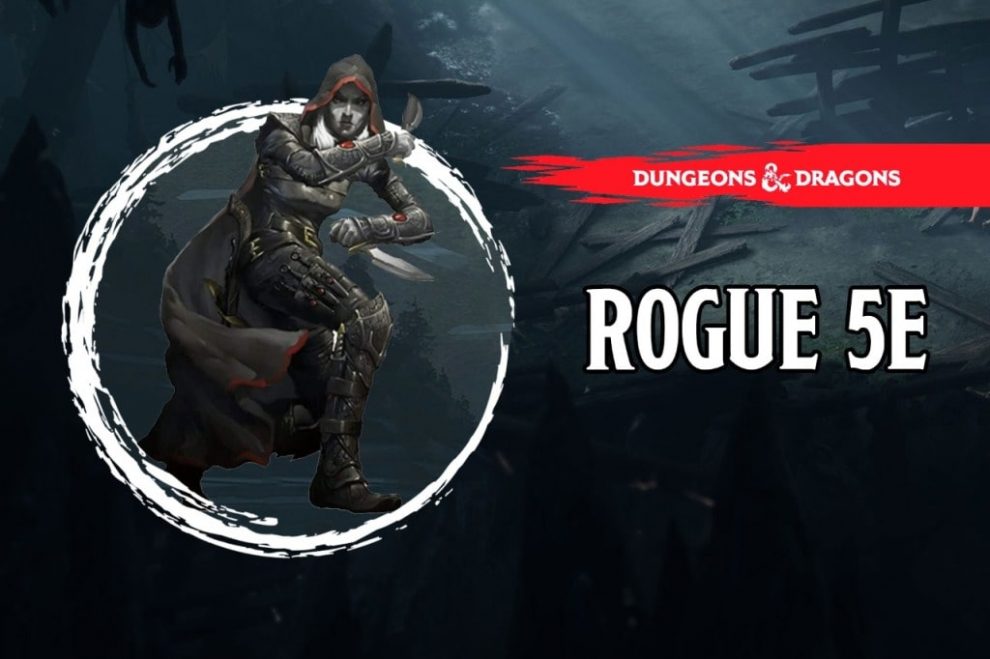 The Scout, the Striker, and the Face_ it seems like the Rogue 5E were born to play these parts in Dungeons and Dragons.

You might think like your party doesn’t need a Rogue. However, when you’re faced with guards, traps, locks, and other such obstacles, you’ll regret your not getting this character class.

Rogues are of two types_ Ranged and Melee. Just as Archer or Ranged Rogues fall back on sniping, Melee Rogues are suitable for two-weapon fighting.

But what attacks does a 5E Rogue specialize in? What skills and abilities do they possess? Moreover, what sort of weapons do they wield? Which races can make better Rogues than others?

Meanwhile, find out which features are characteristic of the Rogue dnd 5e class in the game:-

The Hit Dice is 1d8 for every Rogue level. At the 1st level, you get 8 hit points, along with your Constitution modifier. Meanwhile, for every Rogue level after the 1st one, you get hit points combining your Constitution modifier with 1d8 or 5. Although these aren’t enough to save you when you’re alone during a melee attack. So, surround yourself with a healer like a Monk and either a Fighter or a Barbarian.

There are both Intelligence saves as well as Dexterity saves, though the latter will protect you from fireballs and other such things. As a result, to improve your Dexterity saves, use Evasion.

Think about your campaign’s style and theme, along with your dnd 5e Rogue character, before choosing skills for them. For instance, pick any two of your skill proficiencies at the 1st level, or expertise in Thieves’ Tools and another power. After reaching the 6th level, select two more of your Thieves’ Tools proficiencies or any other skill expertise.

While starting your Sneak Attack, use the option for 5e cunning action, which gets enabled at the 2nd level. Basically, it helps you during combat by letting you take further action on every turn of yours. Furthermore, Rogue melee attackers can flit around the battlefield fast and safely, using Disengage and Dash. However, to stay out of sight between attacks, Archer Rogues should use the Hide option.

This is a mixture of code, dialect, and jargon to form a language that Rogues use for hiding secret messages. Since they learn this language during their training, only those who know it can understand such words. You can also convey short and straightforward messages using secret signs and symbols_ it’s fun!

For instance, bard guide 5e has their own poetic language and a way with words that’s unfamiliar to many. Similarly, rogues have a secret language of their own.

You must’ve honed your selected skills to perfection, by the time you reach the 11th level. In addition, the Reliable Talent feature motivates you to choose the Skilled feat.

You become so elusive after attaining the 18th level, that very few enemies can get hold of you unless you’re incapacitated. Therefore, you are invincible, quite like the DnD blood hunter fifth edition, which can smell danger from miles away.

On reaching the 20th level, using a Stroke of Luck means that you can’t fail whenever you need to succeed. For example, if you miss a target within range, you’ll be able to use this feature for making the miss a hit. Moreover, you need to finish a long or short rest until you can use the Stroke of Luck again.

This feature dramatically enhances your hearing skills. So, if a creature is invisible or stays hidden within 10 feet of you, you can guess its location with Blindsense. It’s enabled as soon as you reach the 14th level.

Whether you’re attacked by an ice storm spell or a dragon’s fiery breath, you can easily dodge out of the way. This feature, making you more agile, gets enabled at the 7th level.

With greater mental strength by the time you reach the 15th level, you can acquire more proficiency in Wisdom saves.

The foundation of all d&d 5e rogue combat tactics is the Sneak Attack 5e. However, for every turn, you can use this feature once. Consider it a blessing that you can use it from the 1st level itself.

Once you hit a creature with a ranged weapon attack, you’ll be able to deal bonus 1d6 damage to the victim.

Subsequently, as you make the rogue level up 5e, the amount of bonus damage keeps increasing.

When Can a Rogue Sneak Attack 5E?

You can use the Rogue Sneak Attack 5e feature in either of the following two situations:-

If you can see your enemy, and this creature attacks you, you can reduce the attack’s damage against yourself by half. But this uncanny dodge 5e class feature is available from the 5th level.

Wails from the Grave

Whenever your Rogue’s about to kill a creature, it will start hearing deathly wails all around. Furthermore, if you see another creature within 30 feet of your victim right after taking the Sneak Attack action on your opponent, you can target that creature. Also, take a long rest to regain all the uses you’ve spent on this feature.

Whispers of the Dead

At the 3rd level, the sounds of the dead start echoing in your ears. After taking a long or short rest, a ghostly presence provides you with its knowledge. This helps you gain proficiency in any tool or skill you like.

Tokens of the Departed

If someone dies in the Phantom’s presence at the 9th level, they can snatch a tiny part of the departing soul’s life essence and give it a physical form. Thus, when you see a creature dying within 30 feet of you, you’ll find a soul trinket in your hand. While this token is with you, you get Constitution saves and death saves.

At the 13th level, the Phantom turns into a half-ghost. When in this spectral form, they can hover and fly at a speed of 10 feet per hour. But they can’t stay in this form for more than 10 minutes. Therefore, you need to destroy a soul trinket or take a long rest before using this feature again.

While using the Wails from the Grave feature at the 17th level, you’ll be able to deal psychic damage to both the creatures.

Take a look at this rogue 5e guide to the feats, skills, and abilities available for your character:-

For 5e Rogue optimization, check out which races would make the best characters of this class:-

So, to find an answer to all these questions and more, keep reading! To know the latest updates, check out Gameizmo.