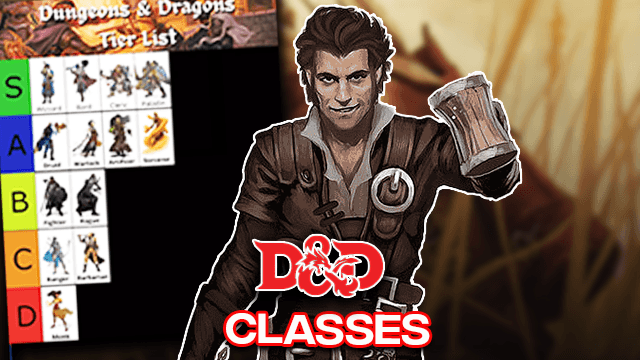 For a new campaign in the ‘Dungeons and Dragons’ 5th edition, you have to create a character. Then comes the part of assigning one of the dnd classes to the new character, but how do you do it?

Which class should you choose for your character? There are so many of them, along with their skills and powers, that your head starts turning.

But you can’t take this casually, as it will decide the character’s future.

Read on to find out all about dnd 5e classes and what you should keep in mind while selecting one for your game character.

What Are DND 5E Classes?

There are 13 classes in the 5th edition of ‘Dungeons and Dragons’. When you choose a category for your character, it’ll determine what abilities and skills he or she’s going to have.

Ability Scores are used to measure the character’s abilities, while Talents and Feats sum up to make Skills.

With the game companion called d&d beyond, you can follow a step-by-step method to customize and control your game characters and their classes completely.

Let’s look at an overview of all the dnd 5e classes in the game:-

An inventor at heart, the Artificer 5e makes permanent and temporary items that are infused with magic. They do use spells, but they’re more inclined towards producing magical objects that are useful and long-lasting.

If you choose Barbarian out of all the classes, you can forget about all stats other than CON and STR. That’s because the Barbarian 5e is more inclined towards combat than anything else. And if you pair that with this character’s rage, you’ve got one hell of a fierce warrior! But if you’re stuck in a situation where fighting won’t help, the Barbarian won’t be of much use to you, I’m afraid.

To get a Bard to cast a spell on your foes, you need to put on your out-of-the-box thinking cap. Bards tend to be quite smart, and they love socializing with different kinds of people. As you might’ve guessed, their charismatic abilities are at an all-time high. But their being sociable might be a reason why introverts find the Bard 5e to be one of the most challenging dnd classes to play.

Basically a healer, the Cleric 5e is a very versatile one. Clerics can be quiet at one time, and start wielding maces and other weapons at another. Some say that they’re blessed with divine magic, as they are devout worshippers of their gods. They usually cast spells on which they need to focus throughout the time during which the effects of the spells remain.

Druids are even more versatile than Clerics, being able to shapeshift into animals they’ve seen before. They consider themselves to be nature’s extensions, as they can harness the natural elements to obey their will. At other times, they can heal people with the help of spells. But Druid 5e spells are a lot weaker than those of Wizards or Sorcerers.

Experts in combat, Fighters face death nearly every day, especially while meting it out to their foes. Out of all the d&d 5th edition classes, they’re best known for dealing damage. But just like Barbarians, they’re not going to be of much help if you’re stuck in a tricky situation from which you can’t punch your way out. That’s because Fighter 5e don’t have enough Wisdom for solving problems or casting spells.

How many of you think ninjas are cool? Well, if you do, then you’re going to love the Monks. Their speed and defensive abilities are both top-notch. This is why they can move with perfect ease in a battle, like getting out of tight places or flitting to where the fight is the thickest. But if you’re looking for the most robust character class, then the Monk 5e won’t be a suitable option for you.

The Paladin can be described as ‘righteous’ warriors, as they’re wholly devoted to their oath. The path that they follow depends on the promise they make. For example, if the Paladin 5e takes the Oath of Vengeance, they’ll forget everything else and entirely focus on pursuing the guilty.

Rangers tend to be lone wolves, but don’t let that fool you! They’re massively skilled in tracking and hunting and are expert woodsmen. They’re your go-to when you want a couple of scouts for your group. Their fighting abilities are best tapped when facing their Favored Enemies. But in the case of other foes, Ranger 5e is not at much of an advantage.

If you’re all up for wicked ways of gaining victory, like lying, stealing, backstabbing, and cheating, then meet the Rogue 5e. Their combat skills are unique, and, like Rangers, they scout ahead for testing the ground. But if there’s no cover nearby and a Rogue is caught in the open, it might spell doom for this character.

Sorcerers are entitled to magic due to their exotic bloodline. Unlike Wizards, they can’t learn too many spells and can cast only a limited number of these. But they are versatile enough to be able to recover Spell Slots that’ve already been used up. The Sorcerer 5e can also duplicate spells, but their spell slots might run out.

Just like Paladins are bound by their oaths, Warlocks dedicate their entire lives to a specific Eldritch Being. As such beings are on the darker side, the Warlock 5e might not be able to adjust with the Cleric or the Paladin in your group. Nonetheless, Warlocks can unlock spectacular magical powers by making pacts with mystic and supernatural beings.

Talk about learning magical theories and then applying the same_ it’s a Wizard! With the help of their Intelligence and knowledge, they can easily outsmart their foes to get out of sticky situations. Their spell list seems never-ending, and you can always trust them to have a plan lurking at the back of their minds. Wizard 5e is all you need to enter the magical realm.

The Gunslingers performs on Dexterity and are known as “advanced hyper-intelligent crafters” who are proficient with the weapons. Also, if you choose one, you will be significant, with due course of practice, be great at Two-weapon fighting (Dual-wielding) with “trick shots” that helps your character with attacking and in gaining damage points. Gunslinger 5e has total reckless characters with significant control over the battlefield that makes them a deadly force.

Primary ability: Dexterity (DEX)Hit Dice: d10Strengths: Have the rites of forbidden blood magic and zeal to sacrifice their humanity and competence, if required.Saves: Strength and Constitution

The blood hunter 5e are also very proficient with their weaponry and are good at Two-weapon fighting. They use their wisdom to identify the undead preys and destroy them with their strength. Even, at times sacrifice their competence and humanity, if required but save themselves before turning into the monsters they are hunting.

The Most Powerful Class among the 5E Classes

To be honest, none of the dnd classes is more reliable than the others. This is because every category has its own sets of strengths and weaknesses.

For example, a Barbarian can fight his way out of a fix. But put him in a situation where hitting is not an option, and he won’t have a hope of coming out of it. At the same time, if a Wizard were in the Barbarian’s place, resolving this issue would’ve been as easy as ABC for him.

Also, the definition of power differs from player to player. While you might see power as the strength to defeat others in combat, another gamer might think that proficiency in a particular task is called power.

This shows that all the classes are balanced out pretty well.

How to Choose One of the DND Character Classes

If you care about your character’s future, you should choose the right class for him/ her.

But doing so after days of playing the game means that you’ll have to start shaping your character all over again. That’s so frustrating!

So, make sure you get this right the first time.

All the d&d 5e classes have their Primary Abilities, like Intelligence and Strength. Think about what role you want to play in the game. Next, choose a category with an Ability Score matching that role.

For example, if you wish to be a scholar, select a class with the Primary Ability of Intelligence.

I’ve compiled a list of all the six abilities and their corresponding character classes below. You’ll find that many categories have more than one Ability Score:-

If they’re stuck in a tricky situation that needs cunning to be solved, they can be as resourceful as possible.

These three classes specialize in punching their way out of any fixes they might find themselves in.

Having a lot of charisma, they rely mostly on their diplomatic skills to save them when danger is near.

Like Strength, Constitution gives Fighters and Barbarians the capability to fight their way in and out of problematic areas.

When in the middle of a brawl, they can’t hit like Barbarians or Fighters. But their Wisdom never makes them be at their wits’ end for a solution to a problem.

Catching their foes by surprise is what these classes are well-known for. They use weapons based on skill, like bows and arrows, as they’re skilled at sneaking up on people.

The process of choosing one of the d&d classes finally boils down to your personality. This means that you should decide what role you want to play, which Ability Scores you like, and what kind of playstyle is required for which class.

For example, if you’re a born storyteller or love socializing with people, you can go with the Bard. Those of you who are more inclined towards religion might want to choose a Cleric.

Are you an animal-lover? Then a Druid is just your type! If you think selflessly of others’ well-being, get yourself a Paladin. Loners are going to love Rangers, while you can choose Rogues if morality isn’t your thing.

In this way, match your likes and dislikes with the dnd classes and their skills. You’ll be having a whole party in no time!