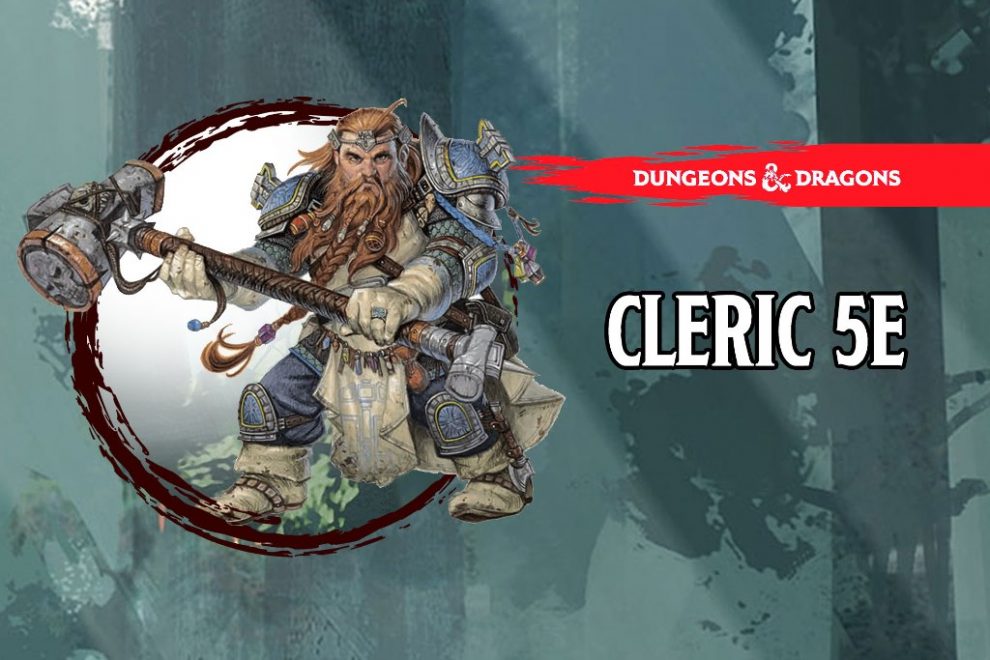 The Cleric 5E has been added into the game as part of the DnD 5e classes. It’s a unique character in the Player’s Handbook. Also, the players of the DND game can select from the 7 different divine domains available when creating the cleric character.

These 7 Traits or Divine Domains Include:

What is a Cleric in the Dungeons and Dragons game?

Before we know more about the Cleric 5E, let us first understand the basics of a Cleric in the game. A cleric is actually one among the standard players in the DND game. Moreover, these are actually versatile figures that are both capable with regards to combat & skilled for the use of the divine magic or thaumaturgy.

Clerics are generally regarded as powerful healers given the fact that they possess a good number of curative as well as healing magic. They also have divinely-granted capabilities over life as well as death. They can also control or repel the undead creatures. Furthermore, clerics have specific domains that generally align with different characters or the god to which the cleric serves. Now, whether your game’s cleric controls or repels the undead is largely dependent upon the alignment of the cleric.

Not just that, it is a class type that is found in various versions of the Dungeons & Dragons game with no name change. However, the peculiar characteristics of clerics unique to them shouldn’t be confused with those of DnD monk fifth edition, even though they are quite similar.

Clerics mostly function on wisdom, but you might have to shuffle it during the game, based on your build and the armour your character is using. Some more abilities are as follows:

This particular section has only beneficial and crucial feats of Clerics, and they are as follows:

With the arms & eyes raised up towards the sun, the elf starts a prayer muttering on his lips. In addition, his body glows with the inner light spilling out and healing the companions that are worn in the Dungeons and Dragons battle. In simple terms, the clerics are actually intermediaries that link between the existing mortal world in the DND game & the distant godly planes. Also, they are not ordinary priests, rather an imbued work that represents divine magic.

So, if you are looking for a Cleric 5E guide, here is your chance to know more with our DND cleric guide.

Clerics tend to differ from most of the spell casters in the game as they can easily use any unprepared spell for healing or harming the clerics that are evil-aligned. However, the good-aligned DND cleric can easily transform the prepared spell in the non-domain genre to be turned into a great healing spell at the very same level.

On the other hand, the evil-aligned D&D 5E cleric can perform similar feats by converting the already prepared spells to the inflicting spells known to cause a similar level of damage. Lastly, the neutral clerics might select a single spell type for conversion in the initial level that tends to be subsequently permanent.

Not just that, this particular choice might also affect the cleric’s ability for turning, destroying, rebuking, or even commanding the undead.

Spontaneous casting might also encourage the clerics to work in a way that is adventurous and often requires the 3.5 cleric DND to be a steady healing source. However, it allows them a chance to mix up a complete spell variety when no direct power source is required.

Clerics in the Dungeons and Dragons 5th Edition game aren’t restricted to the blunt weapons anymore. In fact, they tend to be proficient with most of the simple weapons & might also be proficiently depending on the chosen feats or domains. Let’s be honest, they aren’t gunslingers guide 5e armed with numerous weaponry after all.

More than often, when talking about the DND 5E cleric domains, clerics tend to wield the signature weapon of the deity as the tangible symbol representing dedication and faith. Apart from this, the clerics might use any shield or armor with the exception of a tower shield.

If you are wondering about the cleric optimization for starting equipment, you need to begin with the items listed below. Additionally, you can add anything that has been provided within your background.

Here are some equipment lists that you need to start with:

What is the best Cleric Build 5E?

If you are looking for the best Cleric build 5E, we will list down some of the best clerics spells 5E to be used in the cleric subclasses. Clerics are an essential class or type in the DnD game. This is due to the fact that the previous Dungeons and Dragons game edition made it tough to recover the HPs without actually using the healing magic. So, if there was no scope for cleric optimization, your DnD party might get screwed post a vigorous encounter.

Now, if you were wondering what subclass to pick in the game, it isn’t as important as you might assume. However, the magic you pick as part of the 5E life cleric needs to be the one that adheres to the situation.

How many spells can a cleric prepare?

The number of spells a cleric can prepare depends on the level he/she is at. The higher the level, the higher goes the number, as can be seen in the table listed above in the article. Say, for example, you are a cleric of 3rd level, you have access to 4 1st level as well as 2 of the 2nd level spell slots.