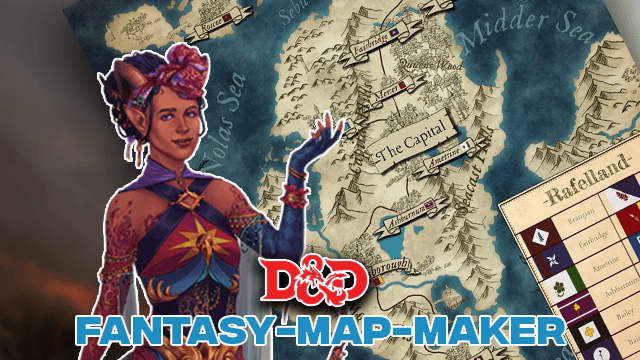 There’s no doubt that players wish to have a visual representation of the realm their characters live in. They have the option of drawing a map on their own, but not everyone is as skilful at doing so. Therefore, a fantasy map maker is all you need for a fantasy map generator. Read further to expand your knowledge about it.

The list below contains the best options to create a fictional map, which would definitely benefit you. So here we go.

One of the best sites you’d come across is this one with its fantastic world-building tools. The speciality of it is –

An example of it is –

Apart from being one of the most excellent tools, it’s also free for the users. However, you won’t enjoy the same benefits as the ones in standard or pro packages. Its features are as follows –

If you’re inclined towards the war theme, this map builder is all you need. Learn more about it –

The latest version of this tool provides gamers with multiple exciting attributes. Here is more about it –

It’s a paid site; however, it offers the best mechanism to the users, so it’s worth every penny. Dungeondraft is a similar website that provides the same functions.

As one of the newly introduced RPG map maker tools, you must try it out.

This map creator fantasy is another free site for users to access. Some other attributes of it are –

One of the most distinct map builders is right here. Know why it’s unique from others –

For those interested in a GIT version of the map, they can download it from GitHub. Here is everything you need to know –

For a basic city chart, you’ll find every necessary tool in this option. its properties are –

This is uncannily similar to the city generator tool; however, it doesn’t offer the same features like that one.

There aren’t many options that this DnD map creator provides, but it’s a fun tool.

It’s one of the few city developers that provide good enough options to the players.

This is my favourite DnD map maker because of its uniqueness and plethora of choices.

Another map developer with limited usage is this one. Here’s why –

Its design is specific to cater to fantasy dungeon crawl style, science fiction, role-playing, and adventure games such as CyberPunk. Other features are –

Quite a unique chart out of all the above, know the reason why that’s the case –

This is one of the most popular tools amongst the DnD gaming community.

For every sci-fi or astronomy fan, you can’t miss out on these exceptional tools to add to your gameplay.

As aforementioned in the first point of the article, this tool is a part of Donjon. Its properties are –

With this tool, you can adjust the specifications of randomly developed globes. Here’s more about it –

As the name suggests, you can create random plate tectonics and keep an eye on their movements.

You must download this tool before using it. Its features are –

Like the tilesets in Dave’s mapper, it offers something a tad bit different from that.

This offers nothing more than allowing you to make stamps from existing pieces.

The reason behind why it stands out is its collaborative functions.  It provides basic art for map editing along with the option to do so with another person.

It’s a hex-based map editor which is available with a free demo. The older version of it was hexographer, but it’s outdated now.

Another not-so-good editor is this one, which provides an in-browser basic hex map editor.

For statistical and academic reasons, this tool enables you to create coloured maps of the real world.

This is another free downloadable mechanism based on vector with excellent functionality. However, it might have become out-of-date over the years.

The history geeks would have a fun time with this mechanism because it aids you in finding historical maps; however, it might connect you to museums or academics with bizarre controls. They are free, but still, check them for copyright issue.

It’s the only Graphical Informations System, free and used for programming cartographic and real-world applications. However, people use it for creating fantasy charts as well.

If you wish to have a mansion of your own, your dream can come true with this tool. It develops a random 3D mansion, which you can view from all sides. However, you can’t adjust the interior or go inside. To regenerate an estate, refresh the page.

The climate crisis is no joke, and this mechanism shows you different degrees of water rising globally. It uses Google API and coastal depth projections.

If you’re a web developer or graphic designer, you can now make your business site or card more exciting by adding a Google map on it. Use this tool to avoid it from looking drab. Its purpose is for non-fantasy maps or real-life game setting.

It’s one of the best free tools out there; however, the only glitch is that it requires payment to save your work.Itdoesn’t offer you everything under the sun like sketching tools, but it’s worth a try.

If you’re unsure about a site, the best option is to go for a trial run. This website offers you just that; a 1 month free trial with watermarked downloads. It includes a free heraldry tool along with a free name generator. You can do a lot in a month, so give it a go.

There are various fantasy map maker options for you to check out and see for yourself. I’m confident that at least one of them would pique your interest, so get ready to become a fantasy map generator and become a cartographer…almost!