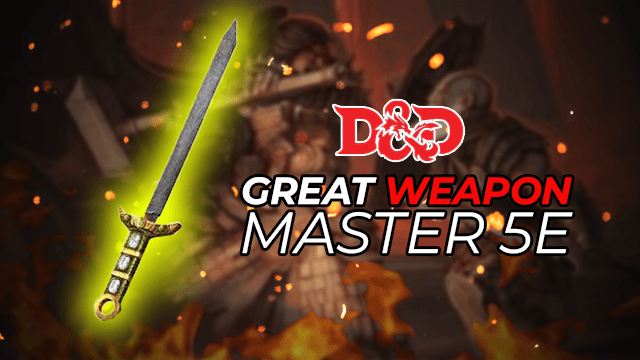 The Great Weapon Master 5e is perfect for players who prefer to be on the offensive side instead of the defensive. They choose to attack with a greatsword or greataxe because of the bonus damage they receive while attacking. You can acquire GWM at level one, making you invincible, and it’d be consistent with classes such as fighter 5e Dungeons and Dragons or barbarian.

When you understand how to use the weapon to your advantage in DnD, you will gain the following benefits –

The issues with these benefits are as follows –

The fighting style with this feature is unique, and here’s how it goes –

If you possess a melee weapon to roll a 1 or 2 on a damage dice, you can reroll it and apply the new roll, even if it’s 1 or 2 again. However, another prerequisite is that the weapon should have a two-handed or versatile property to enjoy this feature.

You get a gain of 0.8 damage points per hit. It’s nowhere near the +2 damage benefit you receive in a Dueling fighting style.

Here are the instructions to calculate the Great Weapon Master feat 5e. I’d try to simplify it as much as possible so let’s do this.

A 5th level fighter, Ted, acquires 18 strength and a +1 sword. His opponent’s AC is 15, so how much damage can Ted do to him with this feat in three rounds of combat?

I’m disregarding critical hits and assuming that the rolls have no benefit to make things easier to understand.

Now you can see the issue with the second point I mentioned earlier wherein the reward is far-reaching than the downside. Moreover, as you move higher in D&D, more discrepancies would follow as the Weapon Master feat 5e would combine itself to the particular class’s characteristics, such as barbarian’s reckless attack attribute and become more advantageous to the player.

How to fix these issues in Great Weapon Master 5e?

This part of the article would only focus on finding a solution to the second problem that the players face. There are a few options that might work.

Using GWM would also be using its fighting style, which enables you to reroll 1s and 2s. So the average damage is 8.33, which is a slight decline from 10. Also, when you get critical hits, between 5-10% of the time, you’d be dealing with 16.67, which would increase your average in all.

Since you know how to calculate with and without feat and the drawbacks that accompany it, let’s focus on which class has Great Weapon Mastery.

Barbarians are acquainted with fields, making them invincible during combat unless the enemy is at level 20. A barbarian’s AC per level, rage bonus, and perks give them an upper hand with 36.61 damage points in a fight with GWM.

A fighter, on the other hand, would have a 31.53 DPR. So on average, a barbarian would use 5 more points in a round than a fighter. Here, we assume that the fighter doesn’t have an advantage like the barbarian due to a reckless attack.

The DPR above is the highest average as it takes into account the hits a player misses. However, it doesn’t take into consideration magic weapons due to their uniqueness for every campaign.

Even if a fighter who is anywhere between levels 1 to 10 possesses the advantage, it’s unlikely for him to defeat a barbarian. A gap of approximately 2 points would always remain between them. It’s only possible if the fighter is at level 11 as he’d be able to overpower the barbarian by an extra 10 points with a 46.47 DPR.

All in all, a barbarian is the ultimate GWM because of their higher skills. A fighter has a chance against them only if they consistently gain advantage and strike more than 3 times.

Read ahead to get a more in-depth understanding of how the DPR functions individually for both classes.

A barbarian’s DPR has a slightly lower increase in 5e Great Weapon Master. From levels 1-20, they enjoy only a 3.95% hike and obtain a negative return on 5 out of 20 levels. No other class faces the same issue of a negative DPR in the game. Furthermore, if the barbarians don’t possess the advantage, their rage damage would almost equal the overall GWM.

A few classes have the option of striking once or twice. The ones that attack twice have a lower DPR (rise of 14.22%) compared to those that strike once (16.10% rise). However, the former has a higher DPR average than the latter, so in the long run, they are better.

What is the advantage in GWM?

The basic rule is always to use Great Weapon Master 5e if you acquire a benefit. An ordinary player would see a damage increase of 35-41%, but you will witness a rise of 20-35% in DPR only if you’re a barbarian.

A fighter can only cause damage of 22.78 on average by using the GWM if they don’t have an advantage. On the other hand, if they have a consistent benefit, their damage would change to 33.31 points, which is a difference of 11 points. Therefore, your player’s chances of winning increase multifold.

In the case of a barbarian, things are different. Their rage bonus affects their DPR hike; therefore, they should avoid using GWM if they don’t have a benefit. They’d still enjoy a rise of 26.35% without the advantage, which is 6 extra damage points. If a barbarian has an advantage but not a GWM, they will witness an increase of 23 damage points. However, if they have the benefit and GWM, they’d have 29 damage points.

It means that a barbarian can be more lethal with 29 damage points, even without any magical weapons.

The disadvantage in GWM

Its common sense to not use GWM to hit the enemy if you’re at a disadvantage. You’d see a decrease of 30-40% in damage if you decide to go ahead with GWM despite the drawback.

The difference between the downside and the benefit of using GWM is more than 73.2%, which is quite significant. For instance, if you gain an advantage in the first round, your damage points would diminish by 73% if you acquire a disadvantage in the second round. Therefore, it’s not an ideal option to strike with a GWM when you have a drawback.

A barbarian would have an average of 7.88 damage points. A fighter, though can strike three times which gives them 8.9 points on average.

What AC should I strike at?

If you’re wondering what AC should you choose for an attack, the answer is right here. GWM is handy when you’re against a player with AC at 16 or lower than that. However, if you’re at level 20, using it against opponents with AC 21 is reasonable since the DPR would increase positively.

You’d encounter a considerable drop in your AC if you’re attacking 14-15 AC lower. For example, if you’re at level 5, the enemy has a higher AC. As a result, you can go ahead with a shot from level 1-4 to attain a positive DPR despite a disadvantage. It applies only up to level 5.

What is Great Weapon Master 5e?

GWM is using a weapon to your advantage and striking the opponent with it. When you make a critical hit with a melee weapon or ensure that the other creature’s hit points are 0, then you acquire a bonus melee attack.

No, GWM isn’t overpowered even though it’s strong.

When should I take Great Weapon Master?

You should use GWM when your enemies AC is 16 or lower and with no advantage. Remember to use it with advantage only.

How many times can you use Great Weapon Master?

You can use GWM only once, since it gives you only one bonus attack.

This is everything I had to inform you all about regarding the Great Weapon Master 5e. It’s an excellent feature if you use it at the correct time and situation. Try to gain as much advantage as possible during every round. 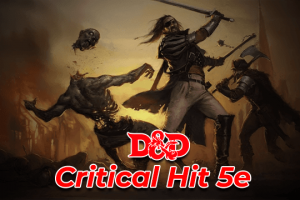 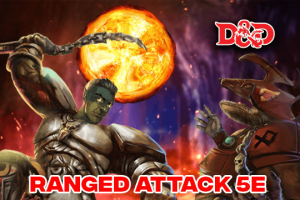