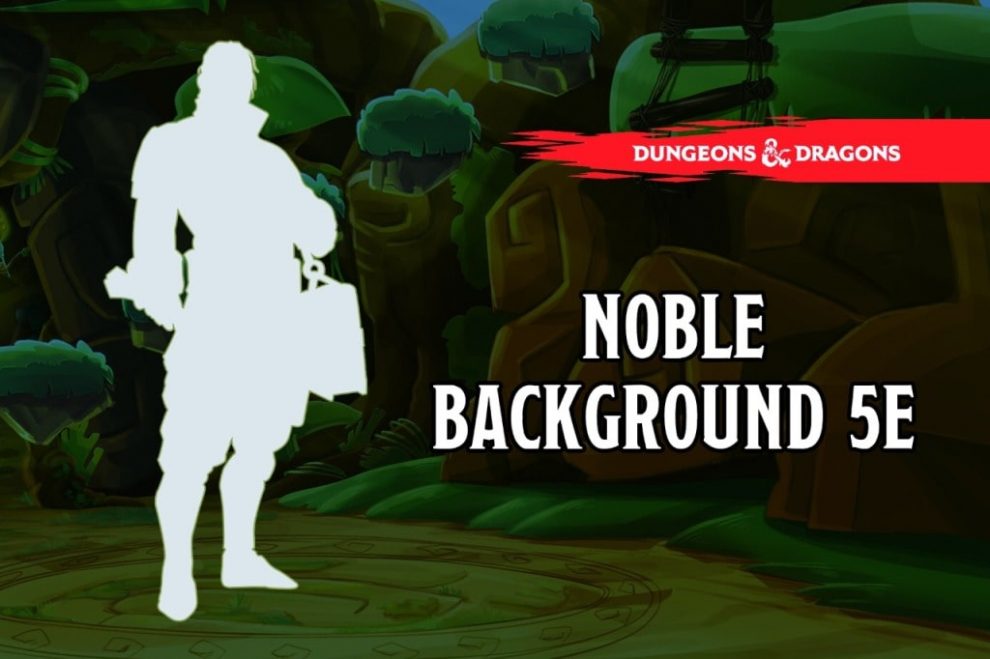 The title of noble in itself projects power and prestige like the soldier background 5e. Your family is wealthy and owns numerous lands which secures them a political influence over others. In the noble background 5e, you get to decide whether you’d be a humble person even after all the pampering or a snob who is arrogant about his privilege. Noble 5e is your chance to enjoy the life of luxury from up close.

Expertise – History, persuasionTool proficiencies – A type of gaming setLanguages – One of your choiceEquipment – A pair of fine clothes, a signet ring, a scroll of pedigree, and a purse containing 25 gp.

Position of privilege 5e – Being born in the lap of luxuries has its perks when it comes to your social status. People pay you respect and try to make you as comfortable as possible amongst them. You have a connection with people in high places which give you an undue advantage.

Retainers – This is a variation in the D&D 5e noble features which allows you to have three vassals who serve the family by being their messenger, attendant or a majordomo. They are ordinary people who perform your daily tasks but aren’t your loyal companions who’d fight for you or go along with you to dangerous placeslike the persona in the Courtier background.  They might even leave your side if their lives are in peril. You can either choose the position of privilege or this attribute.

Variant noble: knight – Even though it’s one of the lower status titles, you still have the chance of being promoted. But if you choose this, you’d have to let go of the position of privilege feature. Your common retainer would be replaced by a noble who’d be your squire and in expects to be a knight in return. The other two servants might be a groom to care for the horses and one who keeps your armour shiny.

The aspect of courtly love isn’t impossible, and you might include a banner or other token from a lord or lady to whom you give your heart.

You might have nobility in the barbarian kingdom, but a feudal system seems unlikely. Aristocracy could be based on hierarchy, or you could earn it by proving to be worthy of the noble titles. You could also decide to be a knight variant wherein you’d be a warrior with a squire under your control, or you can bring your entourage along with you to serve you.

A bard’s expertise in diplomacy and their sophistication makes them suitable for the D&D noble backdrop. They might have been a layman who rose in social status due to his finesse in music. In the knight variant, you might own a squire or a bard training under your guidance. Give these characters clear demarcated roles to avoid confusion.

There is always a clash between siblings regarding inheritance. It’s the second child often who has to choose the religious path and gain power and status through it. Your persona could have done the same, or they might have been brought up in theocracy. In the knight feature in the Dungeons and Dragons noble, you could either be a wandering cleric or a crusader who preaches his faith to all. The religious members might be your followers or a family member who came along with you.

However, they aren’t the only one though who’s forced to choose religion. In Sage 5e, your character might have chosen this path unwillingly as well.

Societies which consider druid magic of high value understand its importance. Elves, dwarves and even superior humans would want to send their children to practice this faith. Your title could be the result of your lineage, or it could be because of your upbringing, which eventually would shape your magic. The knight variation would include a young druid or a servant. You could even have a person looking after the animals.

A fighter and noble is the perfect union. Their combat skills are unmatched. You could either be an expert swordsman or a famous duelist; the possibilities are infinite. Focus on building your family and connections to aid your DM.

Monks as nobles refer to a family of users with expertise in energy or aura. It might be that the society expected you to learn this skill or you might be a natural at it. Your code of conduct and your courtly norms could have a wedge between them, so it’s essential to know your response in advance if the situation arises. The knight alternative offers you the option of being a nomadic samurai or a travelling monk with everyday people as disciples.

This class has got the quality of chivalry to a T. Figure out why and how you got into the nobility class and what did it cost you. Your duty to the court and your oath, whatever it might be could clash at occasions. This could bring out the twist you were looking for and spice things up.

All the prowess required for being a noble are included in the ranger, be it face skills, murder, disguise and picking locks. You could have learned all this by yourself or in any way. There’re no restrictions regarding your imagination. But keep their ultimate aim in mind and their connections.

Nobles are pretty serious about the purity of blood, more than Hogwarts itself. Therefore, sorcerers with this backstory would have powerful spellcasters as their descendants. Natural spellcasters are more valued than sorcerers who discover and learn it.

A warlock owes every property and inheritance to their patron. Your rationale behind choosing this title brings together the rest of your story. In the knight form, does your servant know about your abilities?

A wizard had the best of everything in life. Wizards as nobility have its advantages as they can use magic to curb dissent or to protect their properties. You might even consider yourself superior to other nobles. The knight variation might allow you to have a research assistant or a student or someone to help you out to stock magical artefacts. You have the chance of being a knight wizard, a sort of newbie explorer as well.

If you are riveted by the life of nobility, the noble background 5e is the perfect choice for you. Noble 5e brings your dreams into a virtual reality format, and who can resist that? So, don’t think hard and keep gaming.