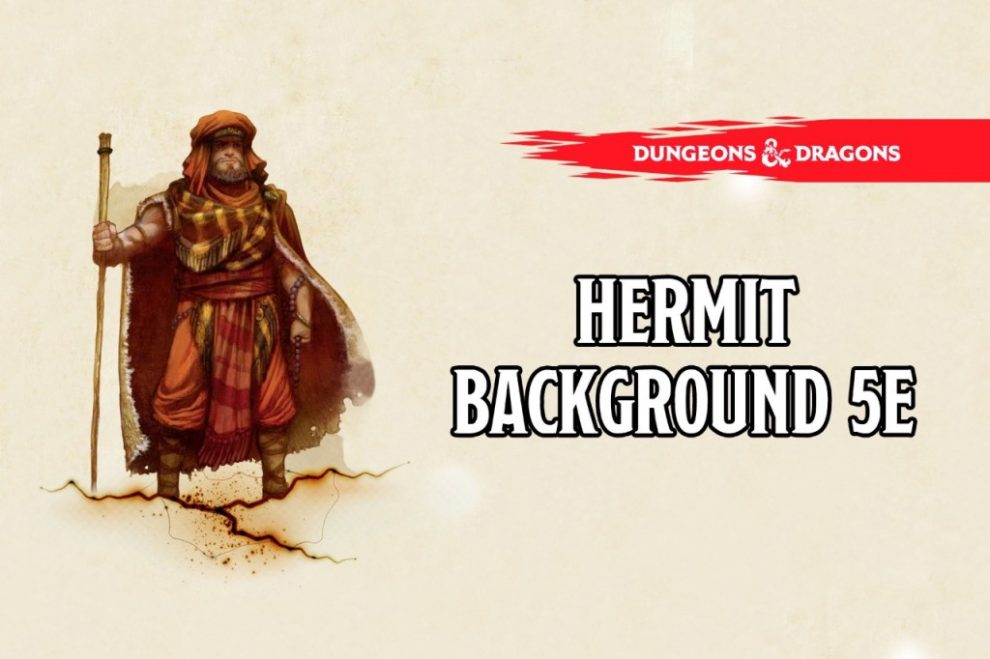 Hermits are known for their life of simplicity and quiet, away from the worldly pleasures of the society, but in the hermit background 5e, you’d have to fulfill an essential task for which you’re ready to give up even your solitude. Your hermit 5e adventure unravels as you begin to discover your quest.

A list of hermit feature 5e is available to you right here.

Secluded lifestyle – It’s up to you to decide what logic you give behind your Dungeons and Dragons hermit persona’s urge to become a recluse. Some of the motives you can choose from are as follows –

Discovery – The essence of your hermit discovery depends on the rationale you choose behind you being an ascetic. Your quest might be regarding the truth about cosmos, deities, aliens, or you came across an artifact that changes the course of history and so on. Your DM would help you out with the details. Also, don’t confuse this backstory with the Sage 5e.

There are 12 variations in the D&D hermit background with the characteristics of each specified in great detail.

Barbarians are considered to be violent and full of rage. They are attracted to living a secluded life in the wild with no other human being in sight. It could be because they were expelled from their tribe, grew up in the wild, or some other reason. A Shelter of the Faithful like in Acolyte background could really help them. You must link your logic for being a recluse to your adventure in some way.

This D&D 5e hermit background narrates oral stories, so it’s unlike for them to be away from people. Therefore, they might have been exiled by the nobility or by themselves. It could also have been because of the prospect of unearthing a lost thing. The story would progress depending, on what you decide to do with your discovery.

It’s pretty common for priests and nuns to travel in search of spiritual knowledge, so your cleric could have the same reason for it, or they were forced into it because of their unorthodox beliefs. Your choice to come back is a crucial one. Your relationship with God is also primary.

Not everyone can be inherently wise like the D&D Cloistered Scholar, but you will find the knowledge you pursue.

Druids are nature-loving and are therefore interested in seclusion. They might want to be a hermit to feel more connected to nature. It’d be better if the quest is related to the environment. You could understand the effect on the natural world of the civilization through your secret, and when you return, all the sounds, sights, and smell would feel different.

He can be a master of arms, a ronin, or a samurai who has decided to leave the world to hone their skills. Being an ascetic involves both magic and martial arts. It will be beneficial if the exile is imposed on them rather than self-chosen. Their discovery could be the king’s real identity or an ancient dragon who wants to devour the world.

Monks are hermits by default, so they might be sent into isolation to complete their training. Self-actualization is the goal of a monk, and their revelation would either help them achieve that aim or make you dislike your current life, pushing you to leave it behind. The logic you choose could be anything instead of sticking to a monastery alone.

Paladins become a recluse to enter the religious order, or they might be an expelled lord whose divine magic is powered through their need for justice. There are other reasons to choose this way of life also.

Rangers prefer living in the wild, and therefore, being secluded doesn’t bother them, but it could have been imposed on you too. They prefer being around animals rather than humans, so they might have trouble adjusting to the real world.

They might be banished for a crime or by themselves to work on their manifesto. They retreated from the world to avoid being caught and, therefore, might return to rebuild their crime circle. Also, consider whether your class abilities and skills were acquired during, before, or after the seclusion. Your backstory plays an essential role here.

Your bloodline or lack of parentage since birth might have led you on this path. Your quest might encourage you to find your ancestors and gave you your powers. Keep all the answers ready regarding your time in withdrawal. Your revelation should put something close to you at stake to personalize your adventure.

Warlocks have an opportunity to honor their pact, so you need to focus on whether they made a pact in isolation and so on. Your patron and his agenda are primary to your discovery. They are powerful, but you can still take him down. Turn your history into an interesting piece.

Wizards become recluse to perfect their magic or to harbor an ancient secret. A necromancer or a diviner is perfect for this sort of thing. They might have a discovery in mind already and come across something sinister while pursuing it. 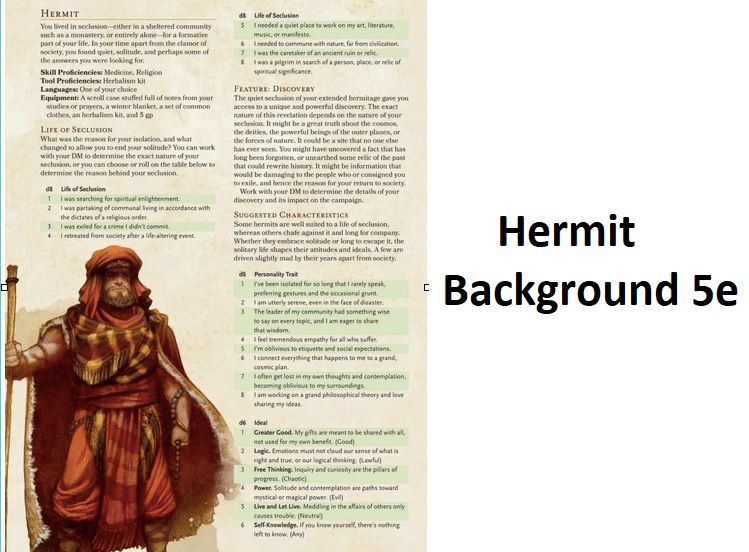 Hermits are considered pious, but with hermit background 5e, you have the creative liberty to carve their backdrop in a way that they appear badass. So what are you waiting for? Start thinking.