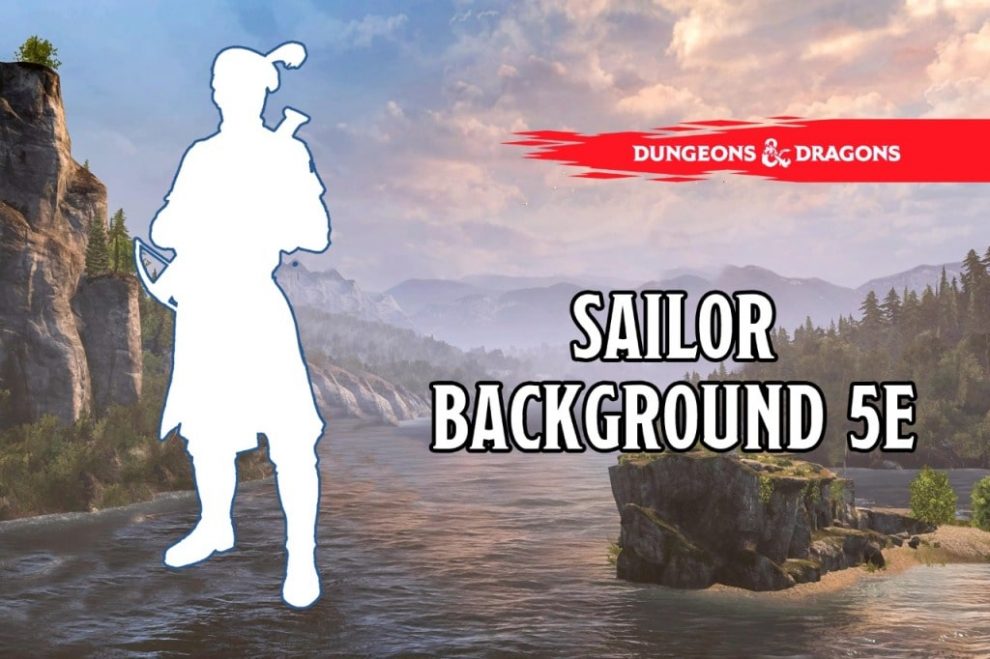 This article incorporates the different facets of the sailor background 5e. Its personality traits, features, classes, and much more are available right here for you to enjoy and learn. Sailor 5e could be the backdrop you were looking for all along.

What is the 5e sailor background all about?

As a D&D sailor, you have been on the sea for most of your life. You’ve experienced moments of life and death, ranging from wild storms, sea creatures, monsters, and so on. You cherished all those memories, but it’s time for you to return home and start afresh.

As a sailor, you’ve always had a knack for directions and maps, quite like the Outlander feature. However, they aren’t as good as you, obviously.

You’d be offered two skills and a feature that would come in handy. Discuss the rest of the details with your DM, such as the ship you sailed, your position, etc.

Here is a list of ideals, flaws, and other traits your character possesses in the D&D sailor background.

The sailor DnD comes with classes that are well suited to your needs, so pick the one you connect to.

Your sailor could have any role on the ship they like, from lifting things to being part of a tribe who spend their time on the sea. It might be that they are spiritually connected to the ocean, and it’s their true calling. If you plan on introducing them to the sea later in life, explain what their quest is, which motivated them to do so. In the pirate variant, deliberate upon what were you felonies? What does the character feel doing so? And so on.

Every ship should have at least one bard as part of their crew because no one entertains you more than the stories they recite when you’re tired after a long, dull day. They might be on the journey to increase their collections of songs and experiences, or it might be that they feel connected to the sea.

The rationale behind your character joining the crewmates on this voyage and from where did they learn these skills would be the cornerstone of the storyline.

Clerics might be a worshipper of the sea god or the god of weather or storms. For those who choose the pirate backdrop, your personae might be the followers of gods of battle or chaos, and it’s the perfect disguise to spread the commands of your patron. The sailors might even be passionate about spreading peace and harmony in the seas.

Emphasize on moments that shape them as a character, like why did they choose to become a sailor or why you decided to stop sailing, and so on.

Druids and the sea go hand in hand. They are excellent at guiding the ship or facing the various sea creatures the ship encounters. Think about why they chose to be a sailor instead of being the protector of the sea. They might feel lonely and as an outsider with others apart from their crewmates, so focus on why they left this life and their plan.

Fighters could be marines interested in military service, or you might be part of the monarch’s navy. You could also be a sailor to explore a new land. It’s up to you to decide how you learned the skills of martial arts. To make your character exciting, you could incorporate some superstitions they believe in and why. Also, figure out the reason behind your character leaving behind this life.

A monk might have selfish reasons to join sailor DnD backdrop as it could be used to go for pilgrimages. It’s also possible that they belong to an order of monks that train in the sea. Focus on when they became a monk and a sailor.

In the pirate variant, you need to deal with how the spiritual side links with this path. Pirate monks believe that life is an ultimate test, and the stronger person survives and takes from the weak. They might also be named so because they are the protectors of the poor and meek.

A paladin’s reason to be a sailor could be their motive of eliminating the bad and evil from the world. After finding their higher purpose, they might have left the sea or joined the marines. Before the campaign, they enjoy a life of comfort and satisfaction. Deliberate upon why you left behind the life of a paladin and why did you become a sailor. If you choose to be a pirate, it might be tricky as to how you justify looting people and disregarding all law and order.

A ranger with a little experience in sailing rivers would be perfect for this backstory as they could go on expeditions and explore all the places on the map. Choosing the river option would be beneficial in this backdrop. Even as pirates, they would be the right choice. They could use their skills of tracking down ships and robbing them of gold and other gems. An animal as a companion would also serve a useful purpose. All you have to think about is why they chose the sea and learned the ranger skills.

Rogues are suited to be stereotypical pirates, as seen in movies, so you have to ponder what would make them stand out. Use their desires to mould the background into something exciting such as did they join the crew to seek greater pleasure and fame out of it? Also, why did they decide to quit?

Sorcerers have a way of getting into any ship, vessel, or navy. Their spells are the best way to defend against the attacks by the pirates or other sea monsters. A sorcerer might find a family in the crewmates on the ship who accept them despite their magical powers. Keep the answers ready for all the when, why, and how.

A pact between your character and their patron might be in place as they saved their life from a shipwreck. The warlock doesn’t realize until it’s too late that this pact might cost him a lot. They might live in constant anxiety about what might be asked of them, maybe the sacrifice of his crewmates?

Questions such as when they joined the crew, the pact etc. should be answered. Also, temptation is the central theme in this class, so see as to which temptation drives them. Is it love, vengeance, or something more sinister?

Wizards can be a sailor after or before mastering the spells. It could be that you joined the ship to widen your horizons and research more about wizardry, or it might be that you became a crew member to earn money for the studies. Make sure to attach an emotional reason behind you choosing this path.

You can choose to practice spells and necromancy on corpses if you go ahead with the pirate variant. You can even plan for a bigger magical project, and you have the liberty to make them come from a high social status background.

Sailor background 5e gives you the power to shape your persona’s life as you want. There are numerous options and varieties to choose from, as Sailor 5e is your getaway from the boring, monotonous life and would turn it into an adventure.