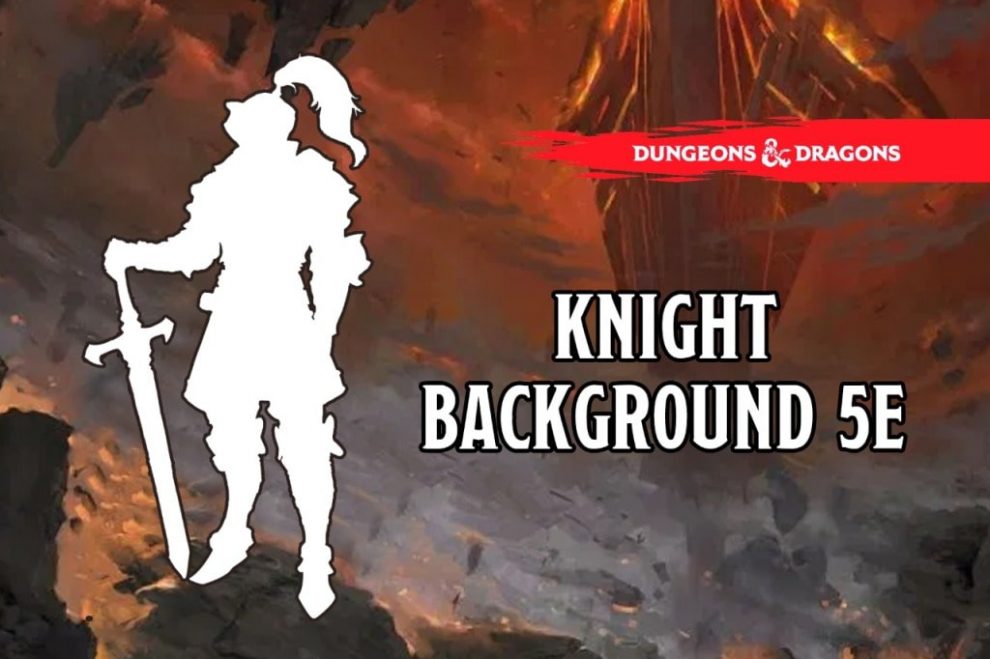 Immerse yourself into the world of battles, wars and adventures by becoming a knight of the order 5e. Moreover, learn about the mystery behind this character and unlock it’s potential by reading through the lines of this trajectory on knight background 5e.

You hold a prestigious position of honour and respect. You were meant for the title of knighthood by the lord as you’re a member of the knightly order. However, your position doesn’t bestow you to break a vow, which is to protect the land, it’s rulers, and it’s inhabitants with your life.

Your title as a knight commands great respect from the whole community. Familiar people consider knights as saviours of the earth and their last hope against the raging enemies. Even the rulers find a safe space with you, and if they are on the opposite side of the battlefield, they will still treat you with much respect. In simple terms, it’s the polar opposite of Mercenary background.

Alas, the choice to become knight 5e falls on your shoulder. You can become a knight if you wish to protect the land and its people or you can become a knight because you might have been a later-born children of the landed nobility with little or no land to inherit. Thus you proceeded your way towards knighthood out of the necessity to maintain your social order.

Another cause might be the bravery you displayed to protect the local God and thus was bestowed the title of knighthood for your chivalry.

Before becoming a knight, you must complete the apprenticeship by serving as a squire to another knight and learning all the necessary skills and ideas.

Knight of the Oder

The title of ‘Knight’ is for those men in service to a particular deity. Other orders that knights serve are the government, royal family, or the elite troops, such as the vicious Warlock Knights of Vaasa. There are knighthoods and the secular and non-governmental institutions of combatants who follow a particular philosophy, analogous to an order of monks.

Knights of the Unicorn

With romanticism, the minded sons and daughters of patriarch families in Baldur’s Gate found the Knights of the Unicorn. They also took the pleasure of making the unicorn goddess Lurue accompany them as their mascot and went on various adventures with her. After facing this dreadful reality in absolute danger and as Lurue’s tenets, they let the truth sink in.

Over time this small group thrived and dispersed and gained a massive following in places as far as Cormyr. The Knights of the Unicorn came off as chivalric adventurers and their fame starting spreading far and wide. Their ideas of relishing life with laughter and adventures, unreachable dreams that are pursued for the absolute wonder, and to award praise to everyone for their strengths and comfort their weaknesses.

The Knights of Myth Drannor were a distinguished adventuring band, and Dove Falconhand, one among the prominent Seven Sisters, was one of them. Therefore, the name that marks the band’s prominence owes it to the wondrous fallen kingdom.

Seeing the town in the grips of ruins, the whole existence of the group was reformed by Dove Falconhand. As a result, their primary goal was of carving alliances and camaraderie between the civilized races in the world and goodly people to thwart malice. The Knights ride the roads again of Dalelands, with their bursting fame to the lands far away.

Knights of the Silver Chalice

The proclamation of demigod Siamorphe in Waterdeep led to the establishment of The Knights of the Silver Chalice. So Siamorphe’s ethos is the responsibility of the nobility to rule, and the demigod inhabits the body of a Nobel every time his soul wanders.

The Knights of the Silver Chalice took the role of putting a proper heir on the throne of Tethyr and re-establish peace in that kingdom. Consequently, this has made them the most popular knighthood in Tethyr, a nation that has hosted many knighthoods in fealty to the crown.

Being the title of a knight, you receive shelter and succour from members of your order and from those who strive for a useful purpose. If you belong from a religious order, then you have access to take needed help from other religious communities.

Civic order Knights can aid you in getting help from the city. It can be regarding either loan settlement or a great nation that they serve. Knights of philosophical orders can aid you in finding those they have assisted in the pursuit of their ideals, and those who share the same ideologies.

You get an NPC requirement like retainer who fulfils all your needs towards knighthood by serving as your squire. You have the responsibility to protect them and evoke the ideas of knighthood so that, they can one day be elevated to the status of a knight.

A squire remains loyal to your commands and always have your back in carrying mundane tasks. These tasks are mostly like carrying weapons, armour and cooking meals etc., which are necessary for your upkeep.

Your squire is capable of defending themselves if they encounter a dangerous situation. However, they aren’t equipped to carry such a massive task. If you fail to protect them or leave them vulnerable consistently, then they’ll go to your service.

Many knights are idealists who follow the strict code of personal honour. The principle of distinction is of highest priority to the knight, and any transgression against it isn’t welcomed by the knight. Religion and order of the gallantry which the knight is a member of, their honour varies hinging on these aspects.

Remember, Knights and Soldier personality traits are cut from the same cloth. Their basic idea and principle of functioning is the same.

Functions of Knight of the order 5e

Avenger of the realm

Finally, Knight of the order 5e is the protector of the realm and a voice for the voiceless. You have learnt the most profound secrets about the knight background 5e and have well equipped yourself to become a saviour of thousands. You are now ready to begin this journey filled with thrill, excitement and adventures.