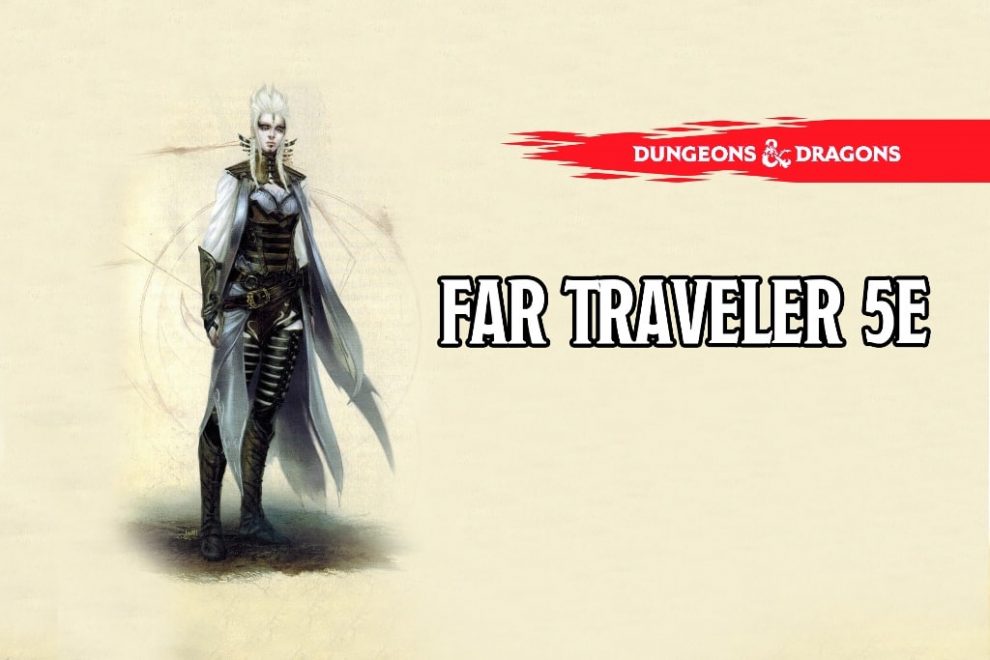 This article flourishes on the Far Traveller background 5e and will help you get a knack for Far Traveller 5e character as well. It features its skills, traits, and characteristics also which will be relevant to you.

Every inhabitant of the Sword Coast shares one thing in common; they spend their lives trying to avoid travelling far from their born place.

But you are an exception.

You were born as 5e far traveler in a distant land that the Sword Coast inhabitants wouldn’t have contemplated. Therefore, the mention of your hometown is in these familiar folk tales and has never caught sight, only described. You have your intentions for coming to this mystic land of Faerûn, which you prefer to keep to yourself.

You might feel alienated from this land, but you are wonderstruck in noticing the common eccentricities of its traditions and practices. As small details intrigue you, you are spellbound for the new things that will come your way.

Why Are You Here?

In far traveler background, you might have taken this journey with some motives, but the departure to your hometown could have been willing or unwilling. The following will give you options to choose the reason for your departure from home. Some possible homelands where the grounds are appropriate are given below.

Where Are You From?

To become a 5e far traveler, you must first determine your homeland. So the places mentioned below are some towns which are distant from the coast side and thereby are relevant for you.

You migrate to Evermeet as you are exiled for breaking the law or are an emissary to propose the benefits of elven culture.

However, a journey to Faerun carries an ulterior motive as it has strict rules against associating with any country and exiles if they have broken any byzantine laws. The reason could be for seeking magic through the shines of Gods in other states.

Diplomacy and trade relations are the prime reasons for travelling to Faerun for Kara-Tur people. Your motivation can be that you came to negotiate terms and then decided to stay there.

The reasons for departure from this land could be due to the wanderlust for exploring the wetlands of Faerun, or you could be fearful of making enemies.

Glaciers and ice caps surround Sossal, since its situated far north. No one can go through such harsh a weather to Faerun, only work of extreme significance invites such a dangerous journey.

Your intention to travel could either be due to sheer curiosity like the Archaeologist personality trait, or could be due to offering a pilgrimage to the deity.

The reasons for your voyage could be as an emissary or an escape from your homeland as a criminal. If not a native then the reason dwells on some misfortune that you were running from.

Your strange mannerism, customs and appearance lead people to perceive you as an alien. Since you are a nuisance and an object of intrigue for the scholars, they take a keen interest in your standard foreign practices.

On the other hand, in the D&D Uthgardt , the characters perceive others with suspicion.

Luckily, this mysteriousness about you helps in forming an amicable alliance with various scholars and noble lords to gain access to places which mere commoners are denied.

In conclusion, we hope this in-depth learning of far traveler background 5e has equipped with the necessary knowledge of the character. Far traveler 5e will make you urge for wanderlust and will open various intriguing opportunities to explore life’s wonder. For other activities, Gameizmo is the go-to place.